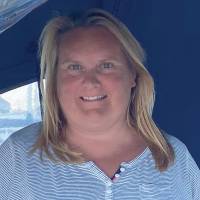 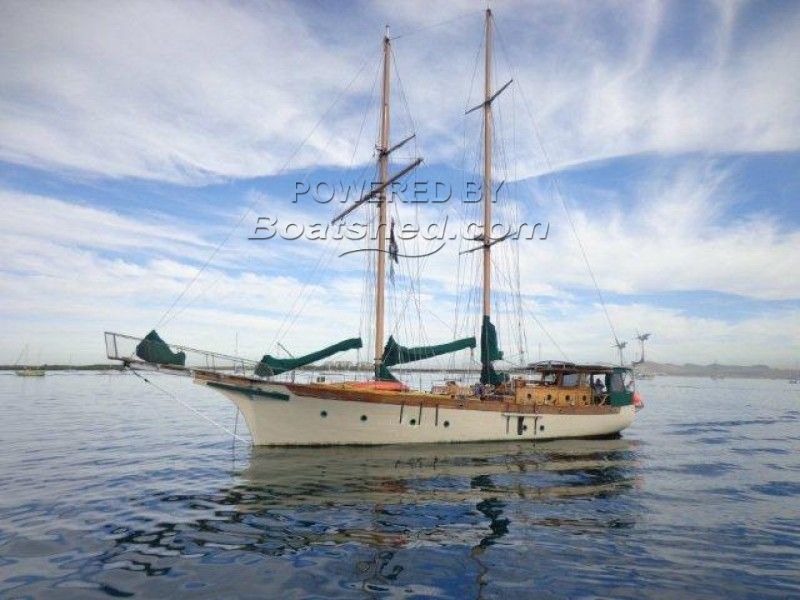 LG projection TV (portable so that movies can be projected on sails, waterfalls, or on screen) Speaker system throughout inside & out of vessel.
New electrical wiring throughout.
All new Cantaloupi LED lighting throughout inside and out Teak interior Custom Teak saloon table and illuminated Teak China hutch.

Worth noting this Schooner NEVER needs to be plugged into shore power or even go to a dock due to her absolute self sufficient set up, With her state of the art electronics and green technology (wind/solar). She can go months at a time without getting near a marina and with today's economy that is a great advantage.
Fuel is generally purchased every 8 - 10 months, depending on passages.

A one of a kind Schooner built in Los Angeles, CA by Arthur Pankey at his shipyard. She launched on Sept 17, 1934.

Literally born of gleaming wood and old Hollywood glamour, 85' Destiny was launched in 1934 for Academy Award winning screenwriter and director Preston Sturges, and named, not just for Lady Destiny, whose siren song calls each and every one of us to become captains of our own fate, but also in memory of his mother, Mary Desti, whose telegraph address was DESTI, N.Y.

Humphrey Bogart captained her as a Transpacific Judges boat in 1936; she was commandeered by the US Navy in what was know as The Hooligan Fleet during WWII (check out the forecastle carvings our Boys in Blue gave her); in 1961 John Wayne chartered her from San Carlos to Hawaii and then on to San Juan Island; and in the '50's she was later owned by Howard Hughes, who secretly married actress Terry Moore aboard the boat. In the 1970's Cheech and Chong's famous movie "Up in Smoke" was written in Destiny's salon and in 2008, owners Dawn and Mike Hilliard took Destiny to Port Townsend, WA for an extensive refit. 42 months and $1.2 million dollars later, she was completely restored from hull to masts and ready for a new set of adventures.

Though she looks like she came straight out of an old school pirate movie, with her all-wood two-masted Staysail Schooner design, Destiny has all the modern amenities you could want, and then some.
At her heart beats a rock steady Detroit Diesel 671, reliably putting out 295hp since 1983, and a 12.5 KW Northern Lights genset. Augmented by a massive 12V battery bank, 2 wind generators and an enormous solar power array, this yacht has no need to put in to port all the time, especially given her Spectra water maker, the more than 800 gallons worth of potable water tankage, and her 1000 gallon diesel fuel tank capacity.

In 2011, the Port Townsend Shipwright Co. re-rigged her wood spars and stainless steel standing rigging, while Carol Hasse took care of a brand new Slab-style Reefing Mainsail with two reef points and a Hank On Headsail. Rounding out the sail complement which sends her soul aloft are a Fisherman (2011), Course Square Sail (2011), Yankee (2011), Raffee (2011), Stay Sail (2011), Gollywobbler (1976), Storm Tri Sail (2011), Forestay Sail (2011), and of course, her Spindrifter Spinnaker w/sock and the Hai Matau symbol on it (2011). She's happiest in about 20 kts of wind and you'll average 7-9 kts in those conditions. Although her rated hull speed is 10.4 kts, the Hilliards have clocked her in at 13.1, heading downwind in 45 kt winds, surfing the front side of a wave.

Making sure you get safely from Point A to your next exotic port of choice, Destiny's state of the art electronics include: Garmin 7200 series at the main computer station, Garmin 5212 series computer in the lower nav station, Garmin GHC 10 Autopilot Control Unit, 5 Garmin GMI Digital Marine Instrument Displays, both a Garmin 300 AIS unit and a Garmin 600 AIS unit, GPS, Chart plotter, a remote control Auto helm, and Radar. There are 3 VHF stations on board--plus portable VHFs, SSB w/modem, Weather fax, and a 406MHz EPIRB.

And while we're talking about safety, Destiny is built like a tank out of old growth Port Orford Cedar, Fir and Mahogany. The interior is Mahogany and Teak. Her high bulwarks make it easy to stay safely aboard in even the heaviest seas and she comes with a full complement of safety equipment, including: a life raft, life jackets, life buoys, proximity alarms, Danbuoy, searchlight, safety harnesses, a horn, 4 bilge pumps, and emergency steering capability.

Once you've arrived safe and sound, take your pick of a 154lb Rockna, 75lb CQR, or the 75lb Danforth, with nearly 1000 feet of BBB 1/2" chain. After the anchor sets, head to shore in your West Marine Hypalon inflatable dinghy with an 8.9hp Mercury outboard, or enjoy a well earned drink, watching the sun set as you relax in the Wheel House.
While Destiny enjoys spacious accommodations down below, including 3 cabins and 6 sleeping berths, it's worth noting that during the 10,000 NM Mike and Dawn have sailed her, most of the time it's been just the two of them...so no need for extra crew if it's privacy you crave.

Even at anchor, all of Destiny's considerable amenities are available to you and your guests, including: air conditioning, an electric head, luxurious tiled shower with an abundance of hot water, full sized 19cf Maytag fridge with an ice maker, 12V chest freezer, 3 burner stainless steel propane stove, trash compactor, a full size front loading washer, and an electric dryer. For your entertainment pleasure, there's a portable LG projection TV that can be displayed on the sails, a roll-down screen, or whatever else you might have at hand. Perhaps a waterfall? As for sound, Destiny's speaker system can handle everything from just the two of you watching a movie in the salon or a 60 person party, both above and below decks.

More than a living piece of history, more than the sum of her impressive spec sheets and equipment lists (which you should definitely check out), and more than merely a boat, Destiny is a home. A home that will take you and those you love to places beyond your wildest dreams. In style.

This Custom Staysail Schooner has been personally photographed and viewed by a Boatshed Representative of Boatshed Portsmouth. Click here for contact details.
The particulars herein are intended to give a fair description of the vessel but are not guaranteed as accurate. They shall not form part of any offer or contract for the sale of the vessel. The prospective purchaser is recommended to independently check the particulars. The vendor is not selling in the course of a business unless otherwise stated. Personal property is excluded from the sale of the vessel unless specifically included in the listing specifications above or in a Purchase Contract. Personal property may be equipment or gear not permanently attached to the vessel including but not limited to: artwork, entertainment equipment, fishing equipment, TV receivers, recreational equipment, kayaks, tools, and personal appliances. Photos that may incidentally depict owners' personal property do not convey that such items are included in the sale of the vessel unless specifically listed herein.