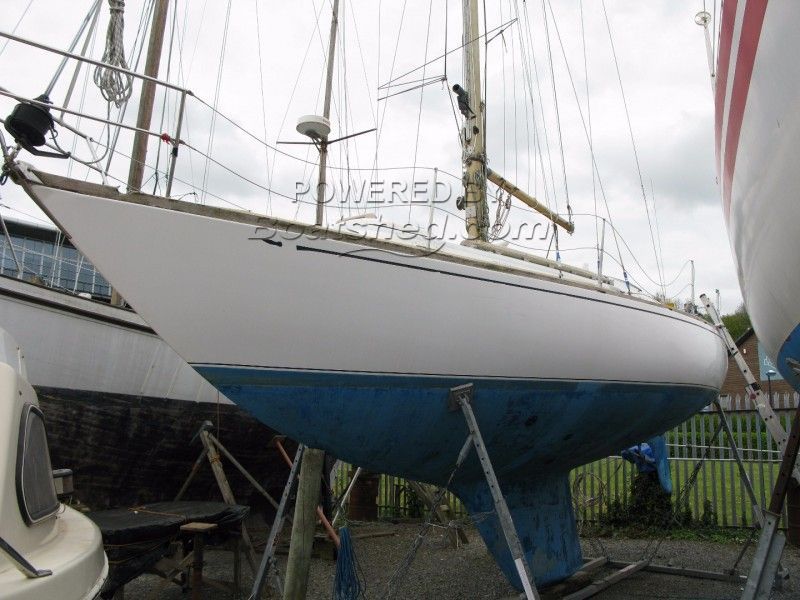 The sweet lines of the Hustler 35 immediately mark her out as an offshore classic. A yacht capable of looking after herself and crew in a blow and who's horizons extend to palm fringed coral beaches. She is not a floating apartment, designed to entertain hordes of guests in the marina having made a short hop up the coast ; which nevertheless she'd have a stab at if pushed! No, she's a long legged ocean greyhound and one that I have personally admired for close on thirty years, albeit from a distance. She has been lovingly looked after by her present owner of 25 years and is presented in above average condition below decks. She is traditionally fitted out to a very high standard with lee cloths, pilot berth and very nice joinery. She has adequate navigation tools for most purposes but a new owner would probably fit more. She would benefit externally from new deck paint which the owner has and will throw in (Not literally!), a fresh dose of anti-fouling (again, will be 'thrown in'), possibly a new anode and some tidying of cosmetic teak cappings in way of the cockpit lids (which are heavy GRP). Plenty of stowage in multiple cockpit lockers are another delight in a serious cruising yacht. Sadly to my mind, they don't make them quite like this anymore.
These boat details are subject to contract.
Note: Offers on the asking price may be considered.

This Hustler 35 has been personally photographed and viewed by Alan Coy of Boatshed Wales. Click here for contact details.
The particulars herein are intended to give a fair description of the vessel but are not guaranteed as accurate. They shall not form part of any offer or contract for the sale of the vessel. The prospective purchaser is recommended to independently check the particulars. The vendor is not selling in the course of a business unless otherwise stated. Personal property is excluded from the sale of the vessel unless specifically included in the listing specifications above or in a Purchase Contract. Personal property may be equipment or gear not permanently attached to the vessel including but not limited to: artwork, entertainment equipment, fishing equipment, TV receivers, recreational equipment, kayaks, tools, and personal appliances. Photos that may incidentally depict owners' personal property do not convey that such items are included in the sale of the vessel unless specifically listed herein.