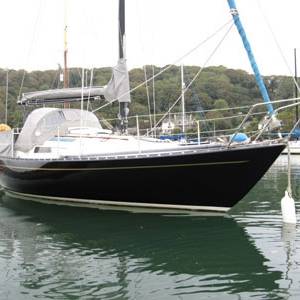 We all want our boats to look like new, luckily as a Yacht Broker I get to see some very tasty well kept boats but I also see very many used boats which although perfectly serviceable and sea worthy are no longer as pristine as they used to be, my own boat is still in reasonable condition but she is almost 30 now and did have a fairly hard racing career in her day so there are a few knocks and dings which in the ideal world I’d like to fix but don’t have the skills to do well.

However my job takes me out and about round the boat yards and marinas and I get to meet the people who do have the skills, tools and expertise to do a good professional job. One of them is Simon Pannell of A1GRP who specialises in making boats look pretty again and he really can work wonders.

Simon does the full range of above the waterline beauty treatments for GRP boats including re-spraying, re-gelling and damage repair work like fixing the scrapes, cracks and dents that boats inevitable accumulate over time however careful the owners and crew are.

Re-gelling is something I was particularly interested to hear about as I was aware of it but not really certain of the exact process so Simon explained:
90% of the job, like all Simon’s work is in the preparation. The surface of the old gel coat needs to be as fair as possible, this means removing any paint systems, repairing damage however slight as the re-gelling would accentuate any imperfections and then keying the surface ready for the new layer of gel. This is sprayed on to a thickness similar to the original gel coat, often around 500 microns. It’s put on as an extra layer on top of the existing gel coat like a new skin but is feathered in at the waterline on the hull.

But it isn’t just the topsides that can be re-gelled. Any areas of original gel coat can be re-gelled. Many old Westerlys have their cockpits re done as the originals tend to wear thin and get damaged over time. It is also possible to reinstate anti skid patches, Simon did mention that this can be time consuming as it means all the deck fittings have to be removed and reinstated but mindful of the average boat owners budget Simon is happy for owners to do some of the preparation work themselves to keep costs down. Another cost advantage is that as long as the weather is relatively dry re-gelling can be done outside. Once the prep is all done it takes less than a day to apply the new gel coat to the average sized cruising boat and it will cure ready for re-launch in 24 hours.

If you are interested in Simon's painting skills then perhaps you'd like to take a look at this beautifully resprayed Sadler 25 which Simon did earlier in 2009. She is now for sale with Boatshed Plymouth

I couldn’t resist asking Simon about the damage repair work he does which includes structural repairs such as stress cracking and collision damage which is especially prevalent in racing yachts. As Simon used to crew on J24s I wonder how much work generation was going on there but he corrected me; the greatest source of his damage repair work comes from what he euphemistically described as parking issues! And I think a lot of us have been there before. Simon indicated that once again preparation is the key to getting repair work right although colour matching can also be quite challenging especially with reds and greens but having seen some of Simon’s work I can assure you he definitely rises to that particular challenge. Take a look at Simon's website to see some pictures of his works.

I also sought out his advise about marine polishes. There are so many on the market at the moment all claiming to be the best so what does Simon use? For cutting back and preparation he normally uses the Farecla products but he couldn’t be drawn on the actual polish, any decent marine wax polish will do the job.

Oh and the worst damage repair story, well two: A chap hit full throttle instead of reverse and actually managed to put the boat on the pontoon, whilst another took avoiding action to miss a buoy and hit the Tamar bridge. 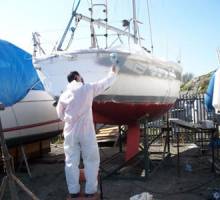 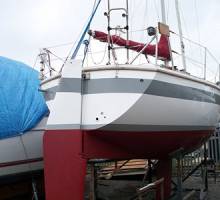 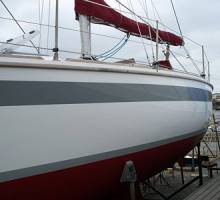 and ready for launching 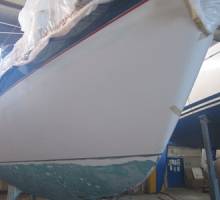 Simon is currently working on this Westerly, he has re-gelled the topsides 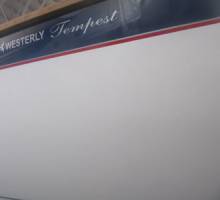 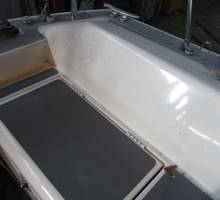 The cockpit has also been re-gelled 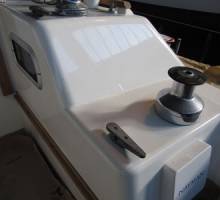 a vast improvement in those heavily worn areas