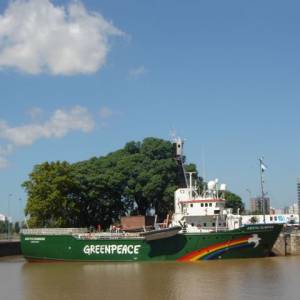 Greenpeace ship MV Arctic Sunrise was in Buenos Aires, The Boatshed team were invited onboard to have a closer look at this very interesting vessel.

MV Arctic Sunrise was on route to the River Uruguay and had stopped at BA to pick up fuel and supplies.
Ironically, before Greenpeace chartered the Arctic Sunrise it was once a sealing vessel. The hull is rounded with no keel, so that the ship lifts out of the ice instead of being crushed by it.

The Arctic Sunrise began its Greenpeace life during the Brent Spar campaign where it was used to prevent dumping oil installations at sea.

In 1997 it became the first ship to circumnavigate James Ross Island in the Antarctic, which previously was an impossible journey until a 200m thick ice shelf connecting the island to the Antarctic continent collapsed. This was just one of the many signs of climate change which the Arctic Sunrise has helped document.

It continues to it's operations in the Southern Oceans continuing to thwart Japanese attempts to pursue its so-called "scientific" whaling programme.

In January 2006 she received damage to her bows following a collision with the Japanese whaling ship, Nisshin Maru. See Photos below

Greenpeace is taking part in a protest that has become known as "The Paper Plant Wars"
Activists who have been blocking international bridges between Argentina and Uruguay for the past month to protest the construction of two paper pulp factories on the Uruguayan side of a river separating the two countries.

Want more details on Greenpeace and how to get involved?
click
GREENPEACE LINK

Want to know more about the "The Paper Plant Wars" ?
click
PO.ORG LINK 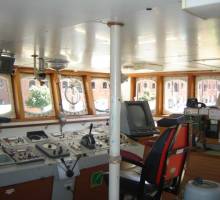 On the Bridge of Arctic Sunrise 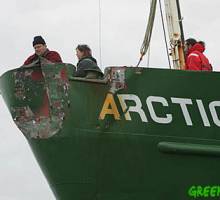 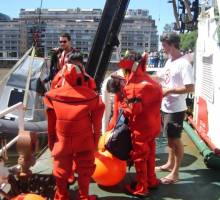 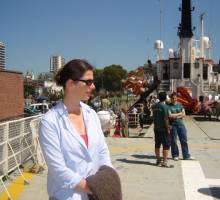 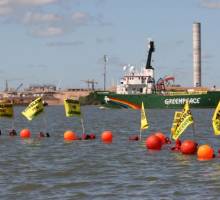 On duty at The Paper Plant Wars 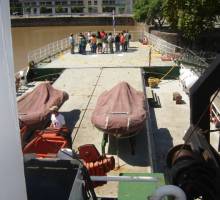 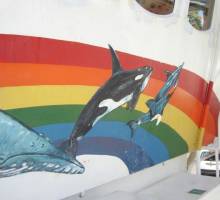 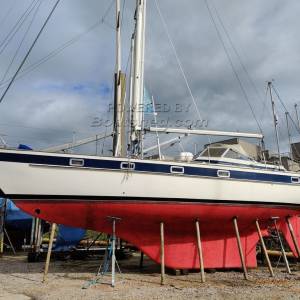