Capibara - The highs and lows of their Atlantic crossing
Thursday, 19 December 2013

Capibara - The highs and lows of their Atlantic crossing 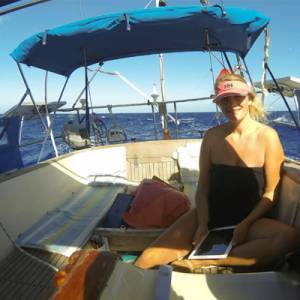 Sunday the 17th of November we sailed from Lanzarote both of us full of excitement and optimism. I just couldn’t believe that we were about to cross the Atlantic!

No one can sail without wind
The first couple of days we had 20-30 knots of wind, and the boat was flying. The party for the late arrival boats for the Atlantic Odyssey fleet in Martinique gave us 24 days to get across, and even though it was on the verge of what we could expect, it wasn’t impossible to make it. I had let Jimmy Cornell know that we would do our very best to make it in time, and that was what we aimed for. We had worked out that if we sailed with an average speed of at least 5 knots pr. day, we would be able to make it, and that wasn’t at all impossible with the trade winds’ 15 knots of wind from the east.

No wind and no electricity
After the first two days we were well above our minimum average and even though the wind fell on the third day, our average was still above 5 knots. On the fourth day, though, the wind fell even more. Our boat speed was between 3 and 4 knots and we were wondering if the other boats had started their engines at this point. We only had diesel to motor for 48 hours, and we wanted to save the diesel to charge our batteries, since our towing generator didn’t produce enough power, when we were going this slow. Besides, our batteries seemed to run low quickly after charging them and we couldn’t figure out why. Henrik was afraid that the batteries were broken, and after having examined the problem it turned out that two out of our three batteries were not functioning anymore. We had to run all electricity through one battery alone, and when the towing generator didn’t produce anything, we had to turn off the chart plotter and the refrigerator and turn down the freezer, while waiting for more wind.

Low after low
The days went by and every day we seemed to hit another low. After 11 days our lowest average was 30 nm in 24 hours. We tried to keep the spirits high, assuming we would get more wind at some point, which we also did, but then we got it right in the nose. We had to tack on our course line, and even though we finally got the boat moving, it was really tough. The first night the wind was strong with heavy rain, and the boat slammed into the waves. I was scared and tired of it all, and I missed my old life, where everything stood still, and I dreamed about nice long showers and sleeping all night long in a bed that didn’t move. After a day or two the wind fell down, but it still came from south-west. One night we were closer to Martinique in the evening than the following morning! At this point we really had to struggle to maintain a reasonable good mood, especially with still 1800 nm to go.

Redirecting to Cap Verde?
During the first week of sailing we had almost daily contact with Henrik’s parents or my parents through the satellite phone. It was nice to hear something from the outside world and Henrik’s mother informed us how the other boats were doing through the Atlantic Odyssey website. However, one day the phone just stopped working for some strange reason, and we couldn’t get it to work again. We knew that Henrik’s mother would be very worried if she didn’t hear from us. We thought about sailing to Cap Verde, so we could get our phone and batteries fixed, but we didn’t feel like lengthen the passage more than necessary. Henrik connected our SSB radio, which hadn’t been connected before, and luckily it worked. After a couple of days we got a hold of two boats from the Atlantic Odyssey fleet: Argo and Blue Pearl. Argo helped us send an email to our parents to inform them that everything was well, but that the phone was broken. Hopefully, they received the message.

Highlight of the day
It turned out that speaking on the SSB radio was the highlight of our days together with our three daily meals. Almost every day we had contact with Argo and Blue Pearl, and it was so wonderful to know that we had friends somewhere out there, even though we barely knew each other. After 25 days at sea we were also lucky to get in contact with our British friends on Magnetic Attraction through the SSB radio. They had left 5 days after us, but were at this point in front of us. They helped us send another mail to our parents to tell them that everything was fine, but that we were very bored. We also listened to the ARC’s round calls and listened to their depressing weather reports. One guy said after having said his position: ” The wind is zero and our speed is so that a dead fish has just overtaken us. ” Another guy said: ”I thought, I signed up for a trade wind passage!” So did we, but it was nice to know that we weren’t the only ones suffering from bad weather conditions.

Finally wind
With about 1000 nm left to Martinique we finally got winds from north-east and east, and they stayed with us until we arrived at Martinique. The winds were a lot stronger than the trade winds, though, and I don’t know if we ever experienced it. We had between 20 and 30 knots of wind with gusts up to 40 knots. Some days we were on top of that hit by one squall after the other, so the boat was send sideways into the waves and we were rolling and rolling and our things went everywhere. Henrik compared it to sitting on the back of a walking duck! Before we left for the crossing people told us that this was going to be the easiest sailing we had yet experienced and after 10-12 days we could just go on and on. We never experienced that, and the last 10 days were unbearable. At one point we could see on the AIS that a super yacht overtook us sailing at least the double speed. Henrik asked if he should contact them over the radio, so I could get transferred for a couple of hours to stay in their Jacuzzi. I wondered why he thought I would return.

Desperate times
The last days before reaching Martinique went by awfully slowly, and we were desperate to get ashore. I couldn’t wait to get a shower, and get the boat cleaned up and our sheets washed. I had several days earlier caught a cold that I didn’t seem to be able to get rid off, and it didn’t help make the days easier. Sometimes I just couldn’t help crying. I was so tired and exhausted of being at sea and in the fairly rough weather, and it seemed like we would never get to shore. But luckily, we did! Wednesday morning the 18th of December we sailed across the finish line and into marina Le Marin (Henrik insisted on sailing across the finish line, so we had to tack the rest of the way). It was a very satisfying moment!

A very long crossing
Our passage across the Atlantic took 31 days in total. It was 8 days more than we had hoped for, 6 days more than we had expected, and 3 days more than we had feared. It wasn’t the easy crossing we had expected, but now that we are ashore it is almost forgotten, and we’re just very happy to be in Martinique, though we barely understand it. I think it’s a bit absurd to think about the fact that we have just crossed the Atlantic Ocean. Even though lots of people do it, I still think it’s pretty cool! However, I’m very pleased that we are not hurrying up to the Panama Canal to cross the Pacific in the spring. I need a long break from long distance off shore cruising! 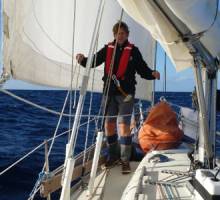 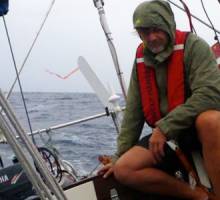 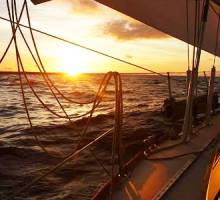 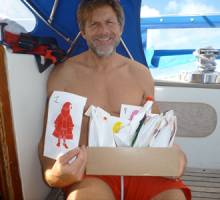 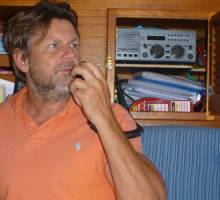 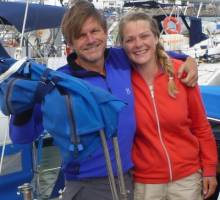