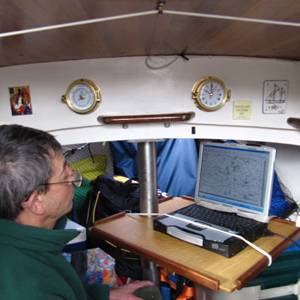 Gus has ensured that the laptop will be as comfortable as possible to use in the centre of the boat.

The array of electronic goodies and gadgets available for boats is mind blowing and the advertising for them seems to insist you’d be foolish to venture out without all of them so Boatshed Plymouth called by “Just Right” one of this year’s Jester Challenge entrants to see what electronics Gus Davidson will be using to get him and his 20’ Golant Gaffer safely across the pond. Gus has a keen eye on the budget as he’s raising money for Macmillan Cancer Support so he weighs the cost of each piece of equipment carefully to ensure as much money as possible goes to the charity.

Navigation
As befits a small boat Gus’ main navigation aids are pretty basic and hopefully reasonable reliable, Imray passage charts and plotting sheets, a complete 2010 Almanac, a steering compass and a Walker towing log with plenty of pencils, plotters and a good sized eraser. But Gus is no technophobe and will be using his trusty Garmin 126 which he has had for a while, is familiar with and which has a display with letters large enough for him to read from the cockpit. He also has a rather ancient but still serviceable Garmin 45 as a back up GPS and a GMR 900 GPS linked into his Panasonic Toughbook laptop which is set to automatically update his position on seaPro electronic charts. Gus also plans to use a sextant to take traditional sun sights and plot his position so that he is practiced and used to doing it should his electronics fail completely.

Safety
With a wife and daughters in the UK to consider Gus has given his safety and the communication of it great thought and careful planning. He carries an EPIRB should the very worst happen, an AIS receiver so that he can see what’s out there but as not everything will be transmitting an AIS signal he will also be using an Echomax active radar reflector so others stand more of a chance of seeing him on radar.
Gus also plans to use a SPOT Satellite Personal Tracker. This handy gadget will send an SMS message or email to up to 10 different people when one of its 3 buttons is pressed. The OK button is the only one Gus is hoping to use and he will send a message at ship’s noon everyday to let his family and supporters know he is fine and his current position. One of the recipients of the message will be the boat’s sat phone so Gus will be able to check the system is working. The other 2 buttons are the help button which Gus will use if he does not have life threatening problems and the 911 button which will send a message directly to the UK coastguard informing them that he has a Mayday situation, the message also includes the boat’s SSR (small ship’s registration) number and CG66 (UK Coastguard voluntary safety identification scheme) and his position.

Communication
Just Right carries an ICOM SSB radio which can receive weather faxes and an Iridium Sat Phone. Gus has carefully weighed the costs of communication and plans to do most of it by SMS and email as this is proving much cheaper especially now he has added a new passive antenna. He expects to easily recoup the £190 spent on this in saved air time. Gus is using the G-comm service to provide compressed emails and grib files which he can view on the Panasonic Toughbook. He’s even created a template email in which he will only have to change the co-ordinates for the sea area each day to make requesting his daily grib file easier.

Power comsumption
This is always the big worry with electronics on boats especially small ones like Just Right but Gus hope’s he’s got this covered too. He has a Fourgen wind generator to supplement battery charging by the engine. Gus has fitted a quick charge system so he can charge the boat’s two 65 amp/hour batteries in an hour with the engine. He therefore intends to run the engine no more than 1 hour every other day as he will only be using his computer, SSB radio and sat phone for very short periods each day and he will be leaving with enough fuel to run the engine for 100 hours.

If you would like to find out more about Gus, his boat Just Right or how to donate to Macmillan Cancer support then please visit his website. 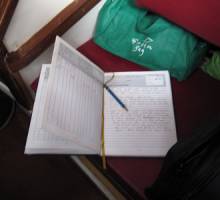 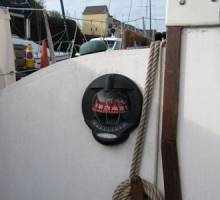 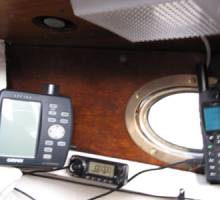 The Garmin 126 GPS an old and trusted friend for Gus 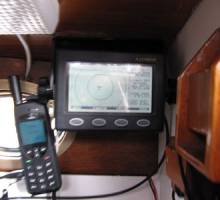 The AIS receiver and Sat Phone 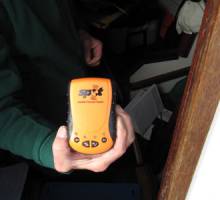 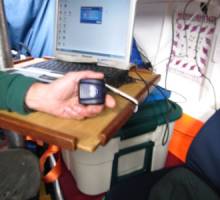 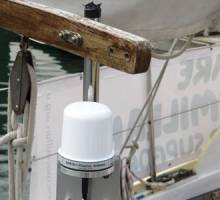 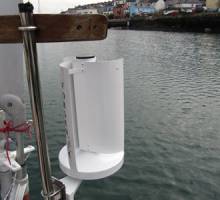 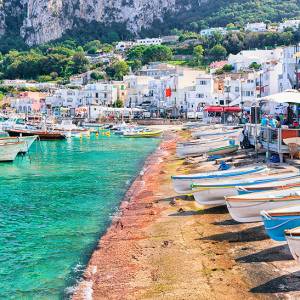