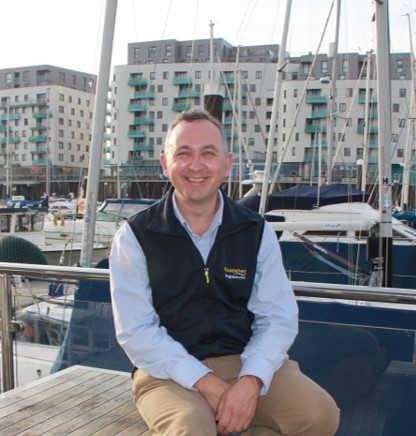 Tim started working with Boatshed in 2014 when he took over Boatshed Brighton. He is kept busy as he also manages Boatshed Palma and Lincolnshire.

He comes from a Naval background having spent 25 years in the Navy as a Marine Engineer, after he left he worked in facilities management and started with Boatshed part-time. After a couple of years he decided to make Boatshed his full time career. Tim loves sailing around the Solent on his Moody but has sailed all round the world on a slightly bigger boat - a Type 42 Destroyer! Learning how to sail single handed has been his favourite moment but encountering the sea sickness that sometimes comes with sailing has not been so much fun!

When he's not working Tim loves to potter in the garden and enjoys a spot of cooking.

If he travelled to a Desert Island he would arrive on a modern, 40ft deck saloon, listen to Marillion - Script For A Jester's Tear, Fugazi and Misplaced. Of course if he was able to go back in time he'd like to meet Nelson as he was the first boating person he was aware of.

Finally we have all been restricted with our travel movements over the last year, however once we are able, Tim will be off to visit his best friend.