Milford Marina, one of Wales’ top marinas, is celebrating its 30thAnniversary.

Since officially opening back in 1991 with just 225 berths, Milford Marina has evolved and developed. Today it proudly displays its 4 Gold Anchors awarded by The Yacht Harbour Association and The Marina Industries Association, demonstrating the commitment the team has made to providing high standards and excellent customer service. It now has more than 300 berths, provides 24/7 security and fuel services and has dry storage available for up to 70 boats in its secure on-site boatyard.

Immediately surrounding the marina is Milford Waterfront – an increasingly popular destination within Pembrokeshire. Just outside the marina itself is the Milford Haven Waterway offering sheltered tidal waters surrounded by a diverse 200 mile coastline.  Steeped in rich history, on the doorstep of the UK’s only coastal National Park and with a bustling café and boutique shopping culture, boaters have plenty to see and do whilst visiting Milford Marina,

Melanie Durney, Milford Marina and docks manager said: “We are so excited to be celebrating 30 years of Milford Marina. There is so much history here in Milford Haven, as well as the many developments ongoing at Milford Waterfront. We are all very proud to be a part of the Marina’s story.”

As part of the celebrations, all berth holders have been gifted special commemorative flags. One of those berth holders has been a customer of Milford Marina since it first opened.

“I first entered Milford Marina back when it first opened in 1991 with Musketeer II,” said Captain Ian Evans. “For me the most impacting change has been the installation of the additional lock gates. Being able to have 24-hour access to and from the marina is a brilliant addition to the convenience, safety and security already provided.”

You can find out more about Milford Marina, and read the rest of the interview with Captain Ian Evans as well as interviews including one with a Milford Marina original, the team’s longest standing staff member at: www.milfordmarina.com.

The post Milford Marina celebrates 30 years appeared first on All At Sea. 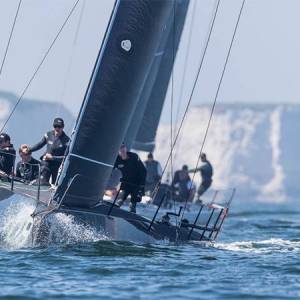