"Exercise the engines" they said 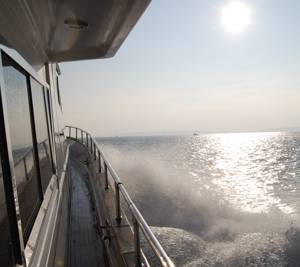 So in time honoured Boatshed.com fashion, the teams from Boatshed Cowes, Hamble and Communications took a spin on the Vitech for a Christmas celebration in the Solent. We were helping her owners to exercise the engines and Boatshed.com never shirk from responsibilities such as these.

The monster powerboat certainly turned heads as she came alongside the public jetty at Hamble and with 72 foot of length, two 1100hp diesel engines and a crew of five, comparisons were soon being made with "penthouse apartment" and "floating sofa".

We took our own photographer, Tim Talbot Johnstone, on the trip but made him "run" alongside in a RIB also out for the occasion so that he could get some waterline shots and so we could taunt him by opening bottles of Christmas Fizz! Tim was finally allowed to join the rest of us and very nearly met the Solent bottom first in the mid-channel transfer.....now that would have been a photograph.

23 knots of speed and a wake that made poor sailing boats quake in our path, the trip out into the Western Solent was made even more fun by the wintery sunshine, the crisp conditions and the general bonhomie on board.

And it was great looking down from the lofty heights of the flybridge on other vessels as their owners nudged each other and whispered - we're sure we heard someone start a rumour that the occupants on board were royalty!

Thank you very much to Frank (Boatshed Cowes) for organising the day and to the owner and crew for taking us out.

The Vitech is currently on the books of Boatshed Cowes and full details, including masses of great photographs, can be found here. She was the support boat for the 2002 America's Cup. If you fancy buying a piece of history, then check out the two America's Cup yachts also for sale, which can be found here 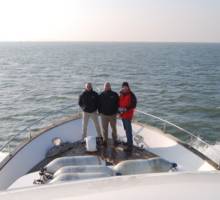 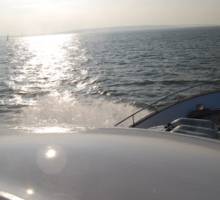 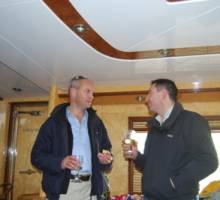 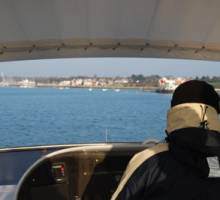 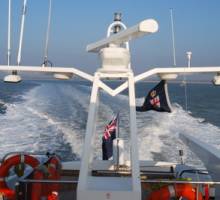