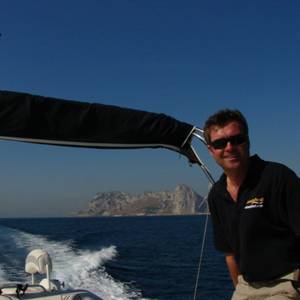 Phil Terry of Boatshed Gibraltar on way to photograph vessel

This Panamanian registered cargo ship, laden with scrap metal is now sitting precariously on the edge of a reef with a 100m drop off Gibraltar.
She had just come off the fuel bunkers and her tanks were full when she was in a collision with an oil tanker on leaving Gibraltar on Sunday evening.

The oil tanker has made it safely back to port without losing any of her precious cargo. She was heading for an oil refinery near Algeciras.

At the moment it is unknown, if after she is pumped out, whether she can be refloated or will be scuppered.

Phil Terry from Boatshed Gibraltar, who set to sea to photograph the stricken vessel, says, ' The harbour authorities are in the process of pumping her out, hoping to avert any environmental impact'. 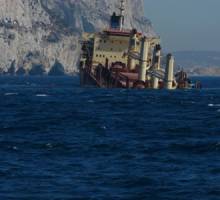