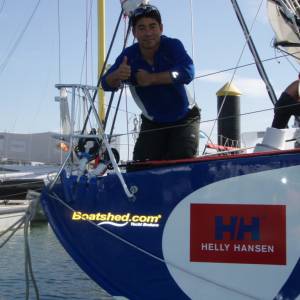 Boatshed are proud to be supporting Kojiro as Sponsors for his Velux 5 Oceans Race campaign.

12:05 UTC 01/02/07 KOJIRO REVEALS A GUILTY SECRET
Japan's illustrious solo-sailor, Kojiro Shiraishi, has dropped below latitude 54° South in the 10:20 UTC position poll. Spirit of Yukoh is now closer to Antarctica than any other landmass and other than race leader Bernard Stamm 1336 miles to the east and third place Unai Basurko and Pakea 964 miles astern, the nearest human being is 1,500 miles due north on the tiny island of Marotiri at the southernmost part of French Polynesia.

This morning, Kojiro reported he was continuing south at 9 knots in a 9 knot north-westerly breeze. Below is the 39 year-old skipper's daily log, sent from the depths of the Southern Ocean within the last hour:

"The wind turned about early this morning to come a little from behind, so I put up the Code 5. However the wind is very fickle. The wind strength varies from 6 to 10kts and the direction constantly changing slightly so we make progress like a snake wriggling from side to side. We are trying to keep maximum speed, but to balance we need to get more south. But if we head too low, we simply drop speed on this angle.

The swell is coming from the south, the opposite direction to the wind, so we are hitting into these waves. With this action of the swell, the curve of the Code 5 occasionally collapses. To keep a good curve and good speed we could head east, but then we are only once again going to run into our new best friend and constant companion, Mr. High Pressure. It's a bit of a balancing dilemma.

To make matters worse the forecast is showing that our new friend may even try to drop down in two days time and revisit us. Damn!! It seems like Bernard will round Cape Horn next Tuesday. I will never get to Cape Horn unless I can first dump this high pressure once and for all.

This ordeal is a trial from the heavens. Perhaps the heavens said 'you had your good sailing on the first leg and maybe you think ocean racing is easy. But you are wrong. So I will bring you back to earth!' I love to be able to tell them that my feet were always firmly on the ground. But that's what the heavens want, so I will raise to their challenge!

Perhaps I should reveal some personal secrets. When I crossed the Equator for the first time on my first ever circumnavigation, I was stuck for almost two weeks with no wind. I had the pleasure of a single day run of minus 15 miles! If I compare to that, this has been much better. The other secret I have not told anyone is that when I visited the Hachimangu shrine in Kamakura before this race, I drew three successive 'Omikuji' telling slips] and unbelievably they were all 'Daikyo' worst type of bad luck] ..... Even after that I was still prepared to bear with this.

Yesterday for the first time in a long time we hit 200 miles in a day. Every little bit towards the finish is an improvement. So anyway we do our best and leave the rest to the heavens.

Sorry if today's log is written a bit strong. Forgive me."

For Full details on the Velux 5 Oceans Race see www.velux5oceans.com 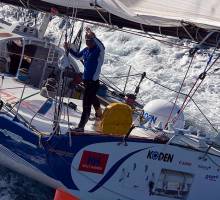 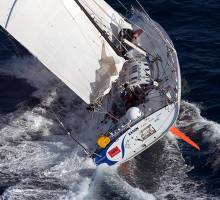 Koji under way on the 2nd leg copyright Yoichi Yabe