WATCH: Jeff Bezos’ megayacht steals away in depth of night Jeff Bezos’ megayacht has made a stealthy escape in the middle of the night after months of controversy following a request to dismantle an historic bridge in Rotterdam.

In the early hours of Tuesday (2Aug22), the 430-million-euro ($485 million) sailing yacht was quietly towed away from the Dutch shipyard, according to German Magazine Der Spiegel.

Hanco Bol, a local yachting enthusiast, spotted the transport in progress around 3am and posted a detailed video of the three-hour journey on YouTube.

He speculated that the alternate route was chosen “to keep the launch and transport under wraps”.

“We never saw a transport going that fast,” he wrote in the caption of the video.

The request was met with staunch opposition from the local community, which led to threats of crowds egging the new superyacht. Following the public outcry, Oceanco withdrew its request for the dismantling the bridge. 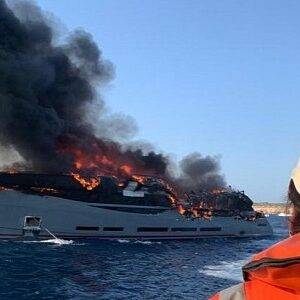