A guaranteed Olympic medal and top three in six other classes on day five in Tokyo.

Emma Wilson, 22, from Christchurch, Dorset, the youngest sailor in the RS:X women’s team, is guaranteed a medal following a strong day of racing. She has an insurmountable lead over fourth going into Saturday’s double-points medal race.

“I don’t think it’s sunk in yet. My coach told me on the RIB and it’s an amazing feeling. I’ve watched the Olympics since I was a little kid and it’s always been a dream. And finally I haven’t come fourth as well which is so good because I’m sick of it. I had really good speed the last few days and that was really good. I have to say thank you to the lads in Weymouth who’ve trained with me. They all helped me so much. It’s an amazing feeling.”

Tom Squires is also in the medal race in the men’s RS:X with an outside shot at a podium place. He’s currently sitting sixth overall.

“The launch race had a lot riding on it, and I had a bit of an average one, so we’ll see how points are when we’re going into the medal race. I had two good races and then the wind just started to drop on the last one and I had a really rubbish start and then I had to find bad lanes out as I was already at the back at that point, so I think I was just trying to take as many places as I could,” he said.

“I just think I got it right today and a few of us were picked up on the right-side favour. Those of us that got there quickest did the best throughout the race and had good downwind speed and were able to hang-on to a couple of firsts.”

It was a fantastic day of racing for Nacra 17 pair John Gimson and Anna Burnet, with two firsts and a second taking them into second at the halfway stage.

Burnet, 28, from Shandon, Scotland, said: “Today I think we felt quite confident and comfortable in the conditions, so we had to make the most of it. We know it’ll change and I’m sure the next few days of racing will see the conditions changing.”

Dylan Fletcher and Stu Bithell raced twice on what was initially a rest day to make up for lost races. They got a third place in the second race coming back from a 14th in the first. They remain top in the 49er.

Fletcher, 33, from Thames Ditton, Surrey, said: “We were surprised in the first race when the Spanish pairing, Diego and Iago, were tacking on us up the first beat, just thought ‘wow, we have got a lot of racing left’. If they are thinking about tacking on us rather than getting their points you know. But we just need to focus on our racing and thankfully pulled it back in the last race.”

Hannah Mills and Eilidh McIntyre finish the day with a race win to move them up to second in the women’s 470.

McIntyre, 27, from Hayling Island, Hampshire, commented: “Seeing the success of others and seeing them win gold, you know, seeing the emotion of people like the coach of Tom Daley, you just sit there and think you can see how much he wanted it and fought for it, and I want the same.”

There’s been ups and downs for Luke Patience and Chris Grube in the men’s 470. A second and a fourth puts them in second overall.

Patience, 34, from Rhu, Scotland, said: “We’re not thinking about it but just being in a good position is an exponential gain, it’s not just a points gain it’s a mental gain as well, so it’s important. Hopefully get a well-earned break, get two races in tomorrow and hopefully go to bed that night still at the pointy end of it all.”

Young, 34, from Bewdley, Worcestershire, said: “It’s been a pretty breezy day with some waves, pretty physical sailing. Generally got myself around tenth in both races. I’m feeling pretty tired and I hiked pretty hard. My starts were decent today so just focussing on executing the key bits well and trying to build some races from there.” 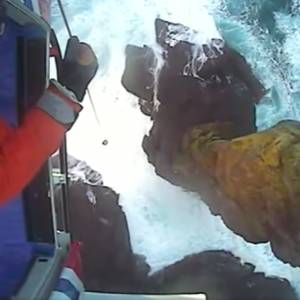