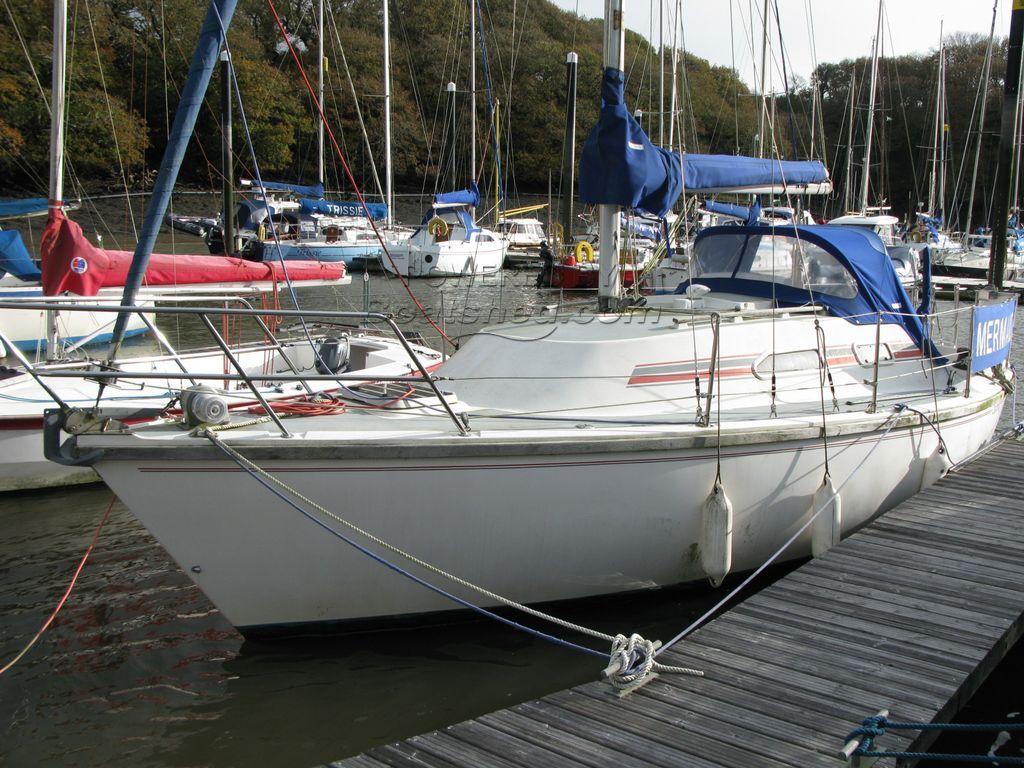 I remember the first time I set foot on the prototype Cardinal 26 at Earls Court Boat Show in the early 1990's. At the time I owned a venerable Westerly Centaur, and much as I was fond of her for coastal and cross Irish Sea cruising, I thought that here was a worthy and classier successor to my Centaur. "One day!" I thought but as my kids grew up my requirements in a family cruiser changed and I never did buy a Cardinal 26. Quite pricey at the time but built and equipped to a high standard they failed to attract the mass market that Westerly had captured. There were less than a dozen made, hence the Cardinal is a little known production yacht from a South Wales manufacturer.
Her interior is much larger than you would expect from a 26 foot vessel, with a twin aft cabin and an open plan main saloon with double forward berths and two settee berths sensibly equipped with lee cloths which make for a sensible family cruiser with a good turn of speed.
While her interior woodwork is of a high standard and her basic design is delightful, there is unexplained crazing in the gel coat in most external surfaces. The only 'cure' for this would be a paint treatment all over - a costly and/or time consuming fix and her recent owners have not considered this worthwhile since it does not affect the strength of the vessel. Where I have seen this fault before it was considered by a surveyor to be a result of too much heat generated in the gelcoat during the moulding stage of build. It does not seem to affect her ability to repel water from her laminate but a surveyor's moisture meter would confirm the reality of the situation.
Her present owner has spent considerable sums on her in terms of sails, rigging and canvas work as well as copper coat and engine leg seal. If it were not for the aforementioned gelcoat problem, which might be considered purely cosmetic, she could be asking approx 50% more than her current asking price.

This Cardinal 26 has been personally photographed and viewed by Alan Coy of Boatshed Wales. Click here for contact details.
The particulars herein are intended to give a fair description of the vessel but are not guaranteed as accurate. They shall not form part of any offer or contract for the sale of the vessel. The prospective purchaser is recommended to independently check the particulars. The vendor is not selling in the course of a business unless otherwise stated. Personal property is excluded from the sale of the vessel unless specifically included in the listing specifications above or in a Purchase Contract. Personal property may be equipment or gear not permanently attached to the vessel including but not limited to: artwork, entertainment equipment, fishing equipment, TV receivers, recreational equipment, kayaks, tools, and personal appliances. Photos that may incidentally depict owners' personal property do not convey that such items are included in the sale of the vessel unless specifically listed herein.