NC: So I’m sitting here with Roger and we’re on a trawler discussion, talking trawlers this week. What is the definition of a trawler, Roger?


RD: The definition varies depending on what the person wants out of that design or what he wants to do. The majority of the people consider a trawler as something that is running slower, is heavier displacement, usually has single engine, and nowadays it includes the bow-thruster and more so including a bow-thruster and a stern-thruster because it makes the boat easier to handle. Let’s go back in history. Bill Parlatore, pardon me if I pronounced that last name wrong, who created PassageMaker Magazine many, many years ago probably a couple of decades, was asked when he started advertising boats that would go faster than hull speed, wasn’t that correct. You’re allowing people to advertise in your magazine of something that is not a trawler definition, it goes fast, it’s got twin engines, it’s got all these fancy things in it, that’s not a trawler. Bill’s response was the next month, “It isn’t what the vessel is, it’s how it’s used,” and that simplifies it.
That really comes to truth right now because when we’re talking to people looking at our boats, when I first started selling the Helmsman line it was almost all single engines and they never really bought more than a 200 horsepower engine, because that would give them ten knots. That’s kind of my opinion and I sold probably the first half-dozen boats with 210 horsepower Cummins diesels in them, well 220 it was then.
So as things progressed and we’ve moved up to now we’re selling pretty much at 300 horsepower or 330, single engine in the boat, because it’ll give you 12 or 14 knots. That’s what people are looking for, not that they use it, but it’s there as a safety device. So if you’re stuck out in the islands or in your open water and it starts to pipe up weather-wise, you want to have that power to get up and move and push the boat. When you take a semi-displacement boat, it’s not a planning hull, you’re just pushing part of the boat out of the water and you’ve got less wetted surface, that’s the key and that’s what the power does.


NC: I see and that extra power then gives them that flexibility.


NC: But, within their usage, they’re generally using these boats as a more long-distance stable platform, yes?


RD: Yes, yes. You get trawlers that are used in the protected areas such as the Puget Sound or Chesapeake Bay and so forth where you don’t need the heavy weather design, you don’t need active or inactive stabilisers. You have a vessel that’s quick and can travel at between eight and ten knots, and they’re very comfortable doing that.


NC: Tell me about single-engine versus obviously there’s a lot of motorboats that come with twin-engines. Most trawlers only have single engines.


RD: Let’s go back in history again. Bill from PassageMaker many years ago, he did a survey, people were asking, “Why should I have two engines? Why should I have one?” He said, “I’m going to review commercial vessels,” and you can go into the archives of PassageMaker and still find this article, what’s the decision? Single or twin engine? They talked to commercial vessels: fishermen; crabbers; lobstermen; everything in that era; ferry boats. You name it, any commercial. Bill on the way in thought it’s probably going to be 60/40 or 50/50 or 70/30 in favour of a single engine, always a little heavier into that. It really came back to most of the commercial people said, “What do you need two engines for? You get more maintenance, you’re burning more fuel, you’ve got more things to go wrong.” If you supply clean fuel and good electricity to maintain it, the diesel engines of these days are not going to fail so all you need is one engine. So it was really a surprise when they wrote this article up that probably 95 percent or more of the commercial people just said, “No, I just want one engine.” Special cases: ferryboats; boats that handle in close quarters and short runs, non-commercial, want twin engines. Of course that can actually be overcome by use of a bow-thruster.
So there you go, back in history again, what do you want is what it comes down to. Most people want to run eight to ten knots and they want to be able to go 12 to 14 knots.


RD: I have known trawlers that have cruised all kinds of not long distance open ocean but coastal cruising, cruising around here in the San Juans, on the east coast, gulf islands and so forth that are 24 feet long and the people on it are exceedingly happy with their 24 foot trawler, with a single diesel engine in it, probably no bow-thruster, a lot of them are still made out of wood. So then, that people is I don’t want anything bigger.
What comes into the factor here is how much are you comfortable handling, not in open water but at the dock? There’s the question. You’re a sailor, what’s the biggest problem with teaching people how to sail? Certainly not getting out in the open ocean with the sails up, that’s easy. It’s getting that darn thing with one little four- or six-cylinder engine in it back to the dock. We laughingly say the image of a sailboat in the San Juan islands of Washington is the main up and the motor on because our summers are so light down there. But the truth, it’s much, much easier, now I’ve come to the dark side and selling more powerboats, to sell a former sailor a powerboat. They have had a difficult time managing a single-engine sailboat that always backs to port, that is uncomfortable in close quarters and if you lose the bow, you’re in big trouble. Now you put them on a single-engine boat that’s 30 or 40 feet long with a bow-thruster and/or a stern-thruster and a big single-engine boat that’s probably swinging a 20 to 24 inch propeller, you can make the stern go any direction you want.


NC: That sort of size, 24, presumably the trawler is roomier than a sailing boat anyway.


RD: It’s a square stern in most cases. The purists say you must have a double-ender powerboat so when you’re in a heavy off-shore sea that it handles just like a sailboat. Our trawlers are pretty much all flat transom boats.


NC: Excellent, thank you so much for your time, Roger, very interesting. 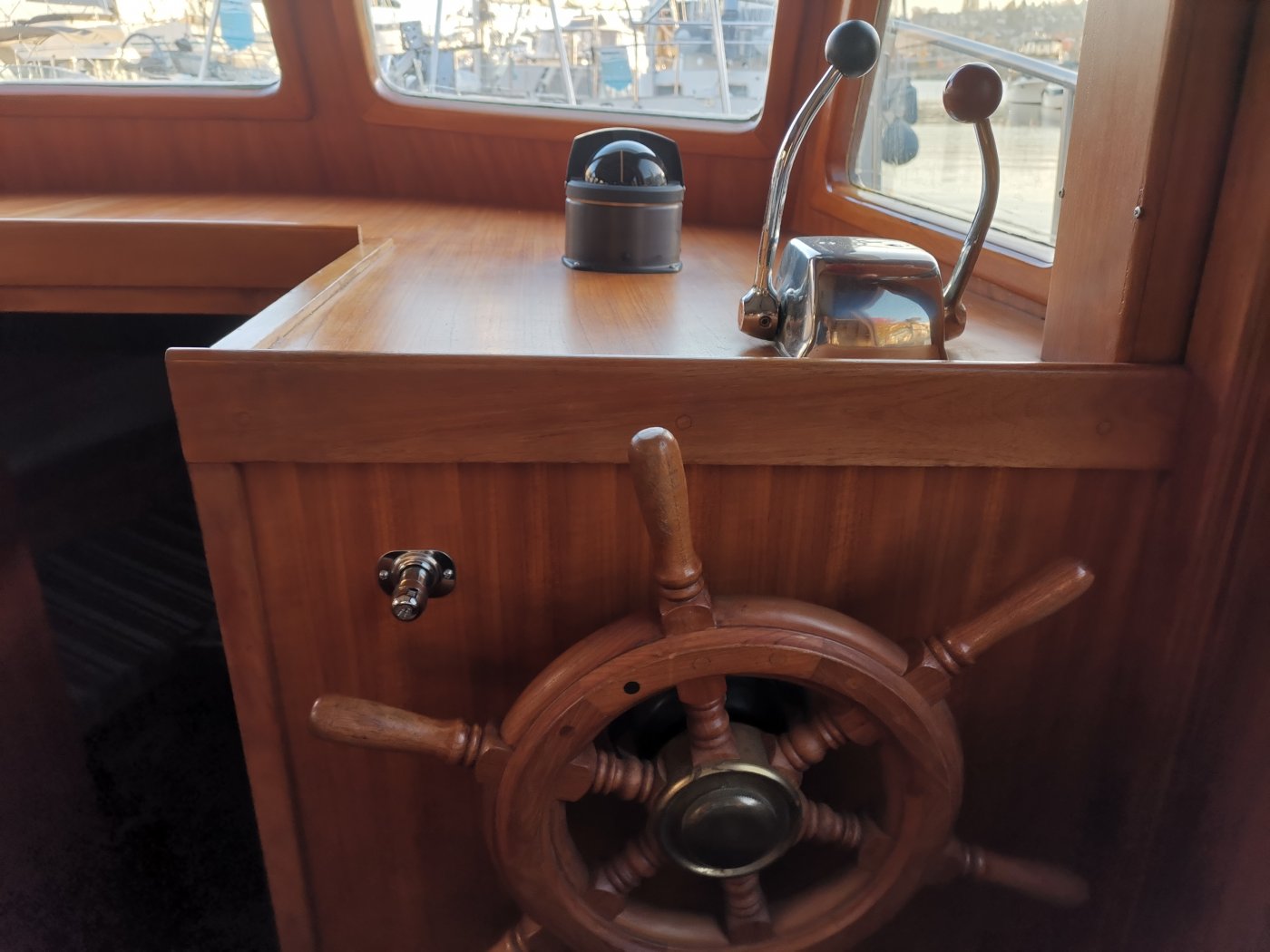